Vegas Time! Associates blackjack is played with four decks of cards (four deck shoe). Cards of rank 2 through 10 are scored according to their face value. All face cards are 10 points. Aces are semi-wild and can be worth either 1 or 11 points. The highest hand in blackjack is an ace and any 10-point card and is called a blackjack. A winning blackjack pays 3:2. If both player and dealer have a blackjack the bet is a push. Aside from a blackjack a winning hand pays even money. The player wins if his hand has more points than the dealer, without going over 21. Thus a 21-point hand is the highest and is why the game is sometimes called 21. If either the player or dealer go over 21 it is called a break or bust and automatically loses. If both the player and dealer bust the player loses. If the player and dealer tie the bet is a push.

A round of blackjack begins with each player placing a bet in the square directly in front of him/her. Then the dealer will give each player and himself two cards. Player cards are dealt face up. One dealer card is dealt face up (the up card) and the other face down (the hole card). If the dealer has a ten or an ace as the up card it is possible he has a blackjack in which case all player hands will lose except with another blackjack.

After it has been established that the dealer does not have a blackjack the player in turn may play their hands. The following options are available.

Stand: If the player is satisfied with his hand as-is he may stand pat. To signify you wish to stand wave your hand as if to wave the dealer away.

Hit: If the player wishes to take another card he may continue to do so until he either stands or busts. To signify you wish to hit tap the table with your finger.

Split: If the player’s first two cards are of equal point value he may split them into two hands. In this event each card is the first card of a new hand. The player must also make another wager of equal value to the first for the second hand. The player may usually resplit up to 2 or 3 times if another splitting opportunity arises. Doubling after splitting is always allowed. To signify you wish to split put the additional wager next to the original wager.

After all players have played their hands, from the dealer’s left to right, the dealer will play his hand. The dealer has no free will but must always play by certain house rules. The rule is that the dealer must hit until he reaches a score of 17 or more. If the dealer busts all players that did not bust automatically win. 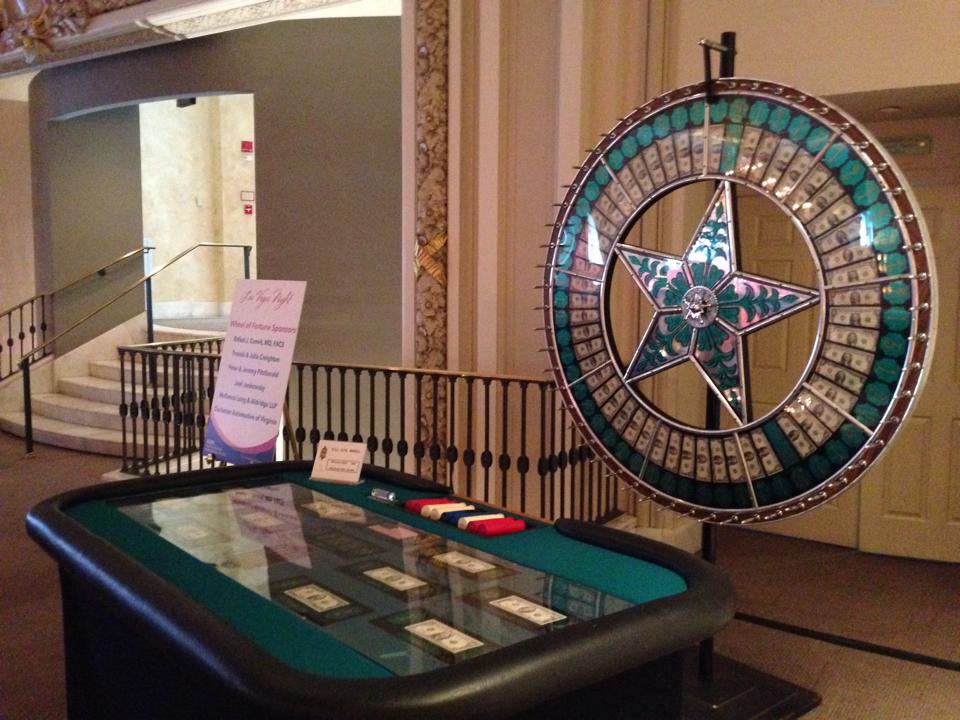 Known as The ‘Wheel of Fortune’ this game is played on a large five foot diameter vertical wheel atop a stand with a flapper/indicator. There are inlaid dollar bills of various denominations ($1, $2, $5, $10, $20). The player bets on which denomination the indicator will stop on. The following table shows the betting options, payout odds, number on wheel.

This game is a variation of poker played on a blackjack sized table. Following is how the game is played:

Play starts with each player making an ante bet in a designated square. Each player then receives five cards face down. Players may examine their own cards but may not share information with each other. The dealer also receives five cards, four face down and one face up. At this point each player has two options: raise or fold. If the player raises he puts twice his ante bet in the raise box. If the player folds he must relinquish his cards to the dealer, who will collect his ante bet. After all players have made their plays the dealer exposes his own cards. If he does not qualify with at least an ace and a king then all remaining ante bets pay even money and all raise bets push. If the dealer does qualify then each remaining player hand is individually compared against the dealer’s hand, and the best poker hand wins in each case. If the dealer has the higher hand the player loses both ante and raise. In the unlikely event the two hands are equal in value then both ante and raise push. If the player has the higher hand the ante pays even money and the raise pays according to the following pay table.

This game is a variation of poker played on a blackjack sized table. Following is how the game is played:

Playing Let it Ride starts with each player making three bets of equal size (1,000 minimum per betting spot x3). Then the dealer gives every player three cards, and two community cards are placed face down in front of the dealer. After seeing their first three cards each player has the choice to take one of their three bets back (from betting spot #1) or to “let it ride” and leave all three bets stand. Then the dealer turns over one of the two community cards. Each player then has the option to pull out another bet (from betting spot #2) or “let it ride” (based on the ‘4’ cards they have in their hand). The player may leave their bet in or take it out the second time regardless of their first decision. Finally the second community card is flipped and the players are paid according to one of the following five pay tables. 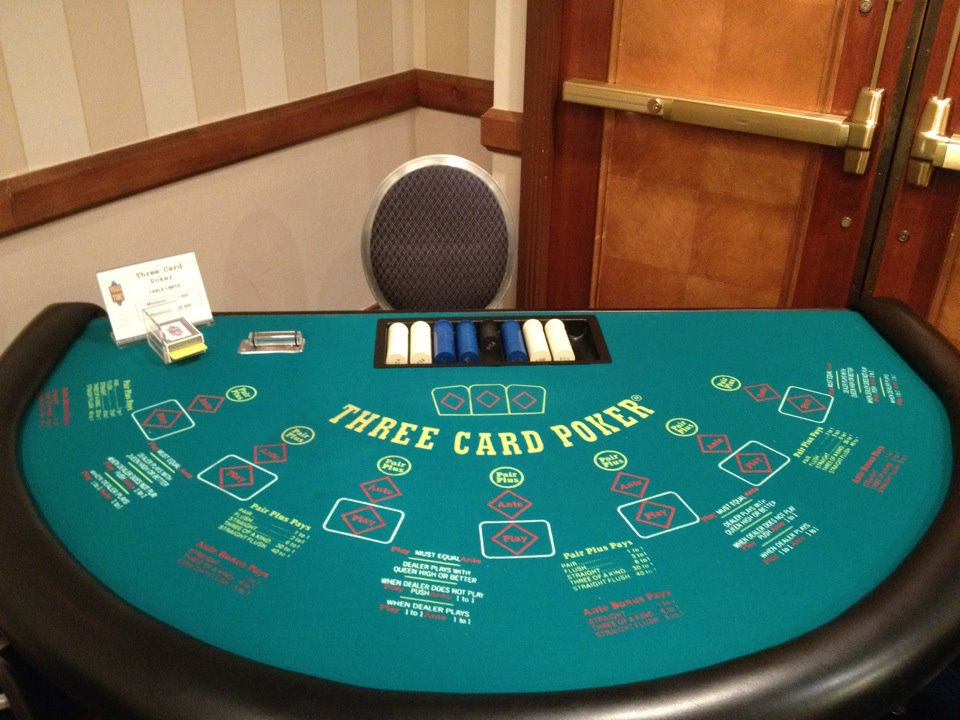 Three Card Poker has quickly become one of the most popular table games in casinos because it’s easy to learn and fun to play. Three Card Poker is actually two games in one. There is the Ante-&-Play game, where you are playing against the dealer to see who has the highest hand. And there is the PairPlus game, where you are wagering on whether or not you will be dealt a pair or better.

There are 3 betting circles in front of each player. The top circle is labeled PairPlus, where the player puts his or her wager on the pair plus game. Beneath that are two circles labeled Ante and Play for the base game. The game begins with the players making their bets, and then being dealt a three-card hand.

This is a simple game in which you are dealt three cards and paid according to their value. The dealer’s hand is not involved. There is no raising or discarding. Below is the payoff table for PairPlus.

Play begins with a wager on the ante. After you view your three cards you may either raise by putting an equal bet on play, or fold and lose the ante bet. If you fold you also lose the PairPlus bet if one was made. This should not be any sacrifice because if the PairPlus bet paid anything, you shouldn’t fold.

If you raise, you then go against the dealer’s hand. The dealer needs at least a queen high to qualify. Below are the possible outcomes and their payoff.

In addition, the Ante bet has an extra bonus that does not depend on the dealer’s hand. This bonus pays as follows based on the ante bet.

A U.S. roulette wheel consists of 38 numbered slots: numbers 1 to 36, a zero, and a double zero. The betting layout consists of every individual number as well as a host of “outside” or combinations of numbers. After the players make their bets the dealer spins the wheel and a ball and after several seconds the ball will land in one of the numbered slots.

The following table displays the available bets and the payoff. 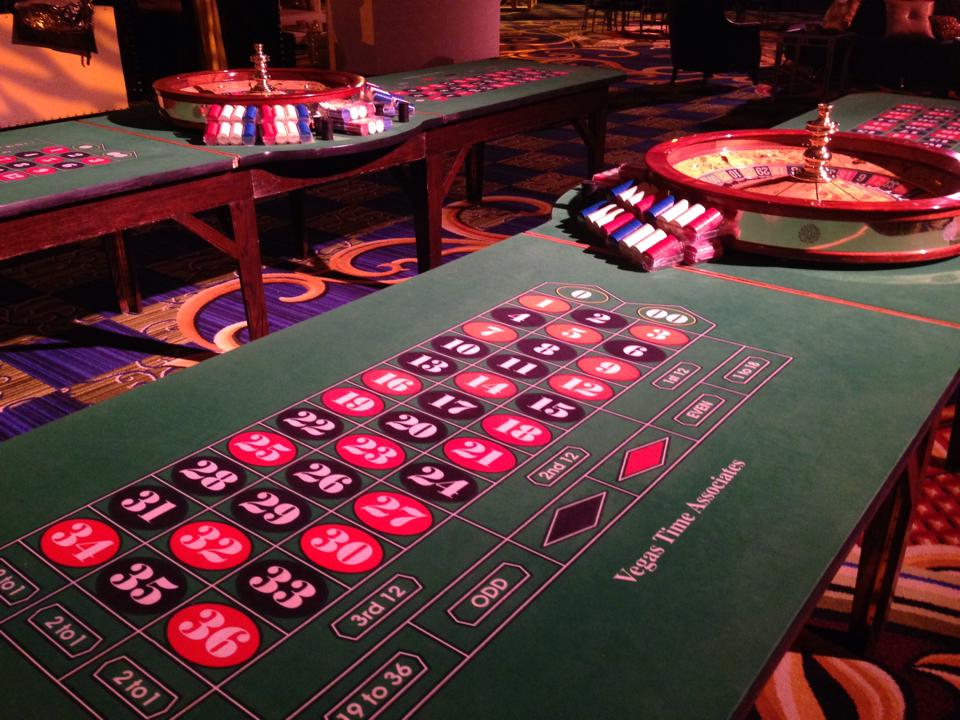 Spanish 21 uses six Spanish decks, each deck consisting of 48 cards — the regular 52 cards less the four tens. Any card counter can tell you that removing any 10-point card from the cards moves the odds in favor of the dealer. To make up for this Spanish 21 gives to the player a host of bonuses and favorable rules. The rules are based on liberal 6-8 deck blackjack rules, including double after split, late surrender, and resplitting aces. In addition Spanish 21 offers the follows rule enhancements:

THE GAME OF CRAPS 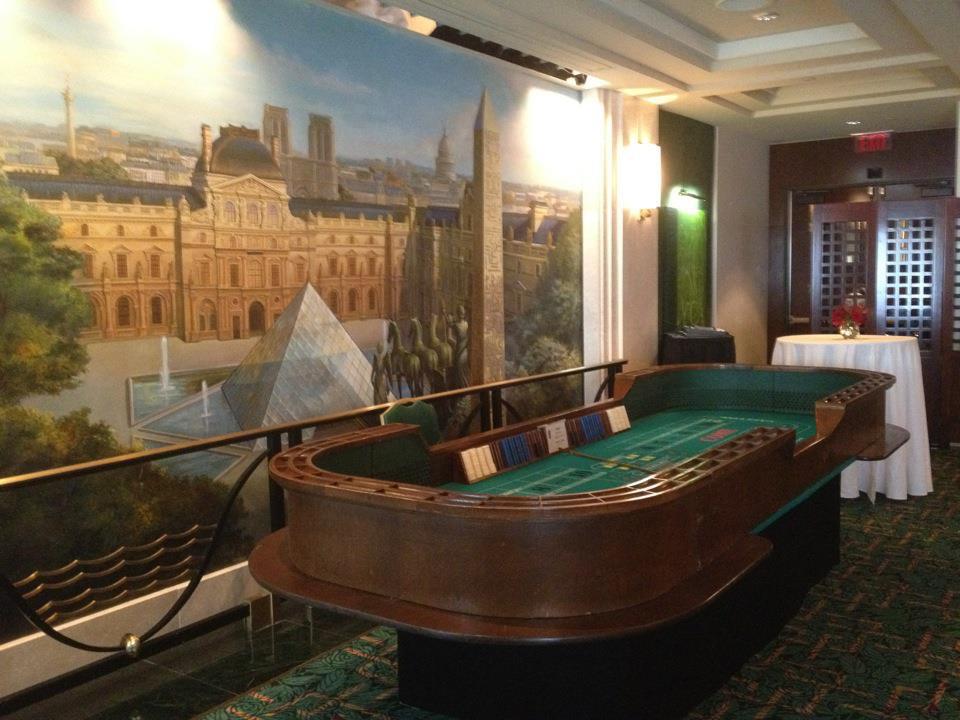 At first glance the game of craps looks a little intimidating because of all the various bets you can make but actually the game itself is very simple, so first let me explain the game with only a brief reference to the betting.

The only other possible numbers you can roll are 4, 5, 6, 8, 9 or 10 and if one of those numbers shows up, then that number becomes your “point” and the object of the game is to roll that number again before you roll a 7, assuming that you have a bet on the Pass Line.  If you have a bet on the Don’t Pass Line, then you want a 7 to come up before the “point” is rolled again.